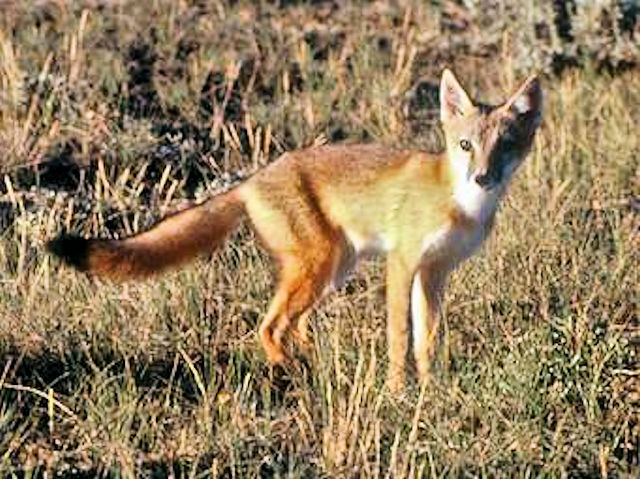 Identifying Characteristics: The swift fox is a small light orange-tan fox around the size of a domestic cat found in the western grasslands of North America, such as Montana, Colorado, New Mexico, Oklahoma and Texas.

It also lives in Manitoba, Saskatchewan and Alberta in Canada. It is closely related to the kit fox and the two species are sometimes known as subspecies of Vulpes velox because hybrids of the two species occur naturally where their ranges overlap.

The fur of the swift fox consists of a thick undercoat sparsely covered with longer guard hairs. The fur serves not only to keep the fox warm through cold nights but also insulates it from heat during the day. The soles of the kit fox´s feet are also covered with hair to protect them from hot desert sands. The coats are pale yellow-beige and grey to blend in with the desert grass. A pale underbelly, dark spots on either side of its nose, and a black tail tip are also characteristic. Like the arctic fox, the swift fox has heavily pigmented eyes to protect them from the sun´s glare.

Total length: Approximately 31 inches of which its tail makes up about 11 inches and stands about 12 inches tall at the shoulder.

Habitat: The swift fox lives primarily in short-grass prairies and deserts. They form their dens in sandy soil on open prairies, in plowed fields, or along fences. It is native to the Great Plains region of North America, and its range extends north to the central part of Alberta, Canada, and south to Texas. It reaches from western Iowa to Colorado, Kansas, Wyoming, Nebraska, and Montana.

Food Habits: Like most canids, the swift fox is an omnivore, and its diet includes rabbits, mice, ground squirrels, birds, and insects as staples. Grasses and fruits round out its diet. However, like any efficient forager, the swift fox takes advantage of seasonal foods. During the summer, adults eat large amounts of insects, including beetles and grasshoppers, and feed their young with larger prey items. Deer and other carrion killed by other animals may also be important food sources.

Life History: It is primarily nocturnal, spending only evenings and nighttime above ground in the summer. Daytime activities are usually confined to the den, but it has been known to spend the warm midday period above ground during the winter. The swift fox is more heavily dependent on its den than most North American canids, using them as shelter from predators. These dens are usually underground burrows that are 6 to 12 feet in length. It has been known to run very fast, at speeds of over 30 mph or up to 40 mph. The coyote is the swift fox's main predator, but often chooses not to consume the swift fox. Other predators include the badger, golden eagle, and bobcat. 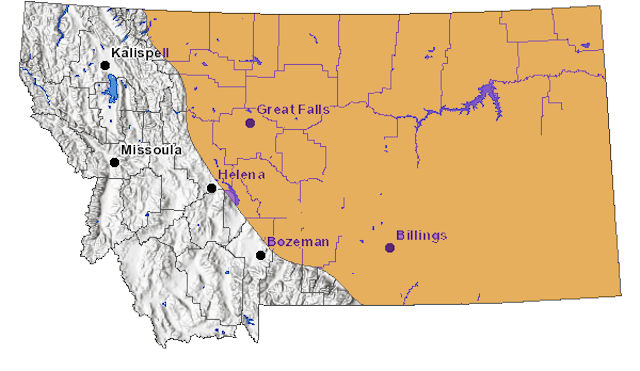 Description
The swift fox has a dark, grayish, tan coloration that extends to a yellowish tan color across its sides and legs. The throat, chest, and belly range from pale yellow to white in color. Its tail is black-tipped, and it has black patches on its muzzle. Its ears are noticeably large. It is about 12 inches in height, and 31 inches long, measuring from the head to the tip of the tail, or about the size of a domestic cat. Its weight ranges from around five to seven pounds. Males and females are similar in appearance, although males are slightly larger.

Reproduction
The adult swift fox's breeding season varies with region. In the northern United States, it mates between January and March with pups born in April and early May. The male swift fox matures and may mate at one year, while the female usually waits until her second year before breeding. Adults live in pairs, and although some individuals mate for life, others choose different partners each year. Gestation takes around 50 days, and one to eight kits are born.

Pups develop quickly, occasionally reaching sexual maturity within a year. Swift fox pups are weaned by 6 or 7 weeks and emerge from dens in June or early July. Adult size is generally reached by early fall when pups are 4 to 5 months old.

Unlike red foxes, breeding pairs of swift foxes have been known to maintain contact with each other all year round. Males have also been known to occasionally mate with more than one female in one season.

The swift fox only has one litter annually, but may occupy up to thirteen dens in one year, moving because prey is scarce or because skin parasites build up inside the den. Sometimes it makes other burrows from other bigger animals, even though it is completely capable of digging one on its own. Pups are born in the den and typically remain there for approximately one month. A newborn pup's eyes and ears remain closed for ten to fifteen days, leaving it dependent on the mother for food and protection during this time. It is usually weaned around six or seven weeks old and remains with its parents until fall. Recent research has shown that social organization in the swift fox is unusual among canids, since it is based on the females. Females maintain territories at all times, but males emigrate if the resident female is killed or removed.

The swift fox usually lives 3–6 years, but may live up to 14 years in captivity.

Season Dates: November 1 - March 1 of the following year. Season will close with 48 hours notice upon reaching the trapping district quota, or on the season closure date, whichever occurs first.

Limit: A person may take and possess three (3) swift fox per season.

Furbearer seasons will close in 48 hours when a species quota is reached or approached prior to the end of the regular season .The F&W Commission has authorized the department to initiate a closure prior to reaching a quota when conditions or circumstances indicate the quota may be reached within the 48-hour closure notice period.

Reporting: Trappers are required to personally report their swiftfox harvest within 24 hours by calling the statewide Fish, Wildlife & Parks reporting line at 1-877-FWP-WILD (1-877397-9453) or 406-444-0356 so that FWP can monitor quota levels. Trappers are required to provide: name, telephone number, ALS number, species, date of harvest, trapping district, county, specific location (legal description), and sex when reporting a furbearer harvest. When reporting a furbearer harvest, it is unlawful to subscribe to or make any statement that is materially false.

Skulls: You are no longer required to turn in the skulls of swift fox.

Turning in the Lower Jaw: Beginning in 2016 pelt tags will• not be issued until hunters or trappers harvesting .a swift fox have provided a cleaned and air dried complete (both sides) lower jaw for aging Aging of harvested swift foxes is important management information that is used insetting harvest quotas Bring clean swift fox jaws Before you bring in the lower jaw. of a swift fox please remove as much flesh as possible You should also allow the jaw to dry in the .open air. Do not use .a storage or transport container made of plastic—use a paper bag or cardboard box instead This will help prevent the jaw from decaying The jaw will not be returned.